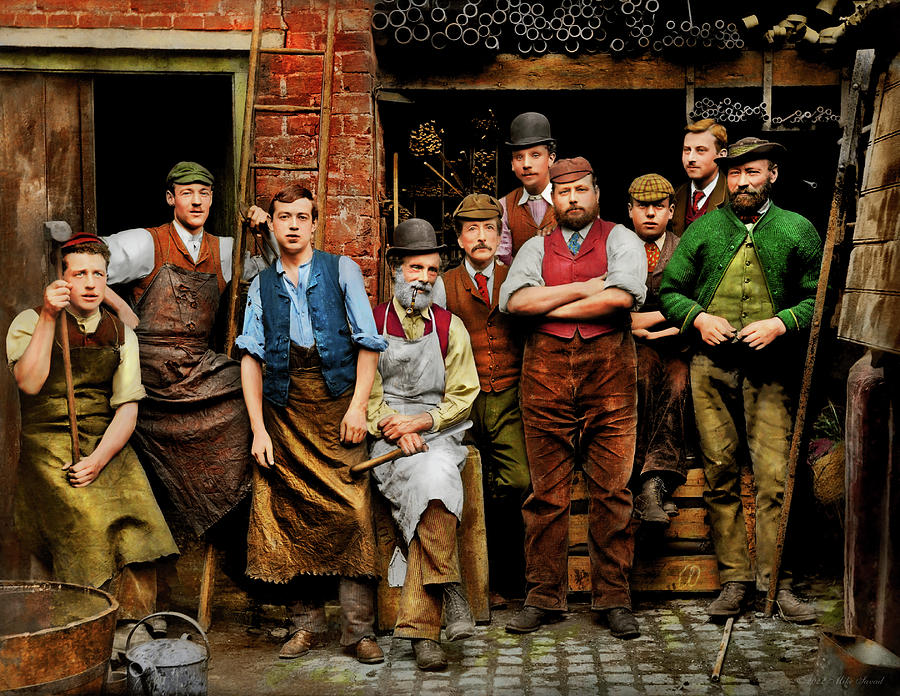 Blacksmith - The Ironmongers of Maidenhead 1900

Blacksmith - The Ironmongers of Maidenhead 1900

Colorized photo from 1900
Original title: Ironmongers pose for a photo in the middle of the working day
Photographer: Unknown
Location: Maidenhead, Berkshire, UK

These rustic individuals are Ironmongers. An ironmonger is an old fashioned way of calling someone that made hardware. Hardware in the past was made from iron, so that is why they are called ironmongers and why hardware stores are also called ironmongers. Not so much in the US, but in the UK they still use that term. They would make door knobs, hinges, locks etc.

By the looks of this cast, they did a bit of everything. Blacksmithing, carving, probably a bit of machining as well. They seemed to work with pipe and wood trim, its anyone's guess what they actually did, other than they all had character and really wore out their aprons.

Speaking of character, my favorite one is the guy with the beard, with that pipe. He has a unique quality, he only has 4 fingers on one hand. Only it doesn't look like any are cut off, I only see three knuckles, like a cartoon character. Now I suppose it could be an illusion of the position of his hand, or the lighting, but it really does look like he was born short a finger. And it didn't stop him from working.