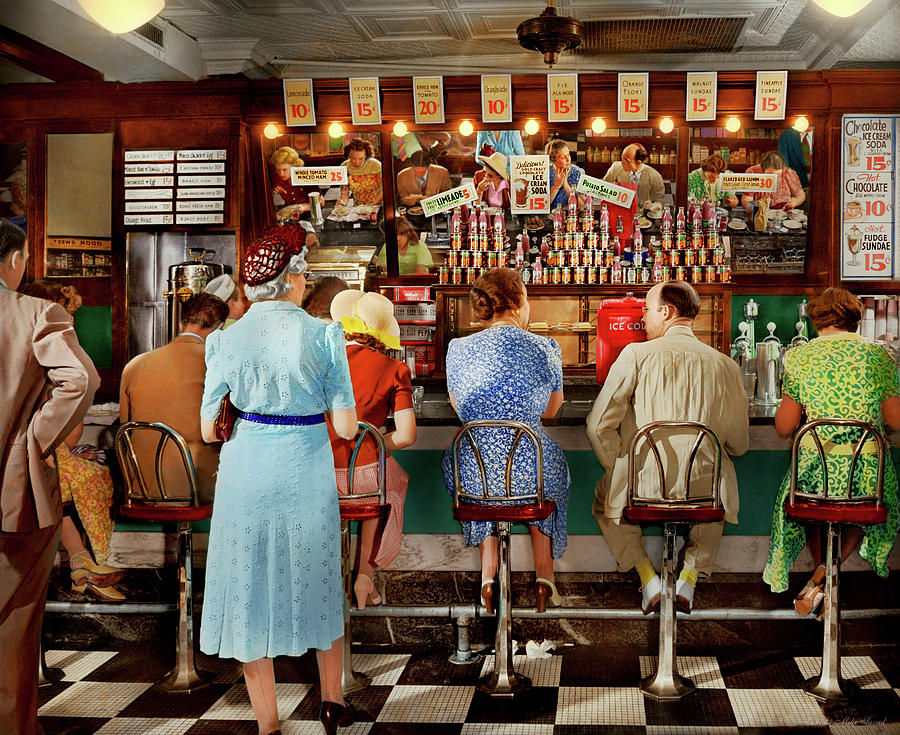 There was once a time when you could pick up a prescription and have your lunch in the same building. Long, long ago, pharmacies created sodas using medicinal herbs, and eventually added carbonated water to it, creating the soda we know of today. In those days soda was used as a cure all, not a refreshing beverage and by today's standards had a lot of narcotics in it.

As more people went to the pharmacy for a soda, to stay competitive, they either had to make their own special flavor, or sell additional things, they would add ice cream to it, making a float. Of course though they had even more competition with ice cream soda places popping up, they had to add more things to their menu. Eventually they would sell cookies, brownies, cake, and pie. Which then lead down to a full blown diner in a place where you buy medicine.

The heyday of the drugstore soda fountain was from the 1920's to the 1950's. You don't see them that often now, people can buy soda, ice cream and so on for their home, not much reason to leave the house just for an ice cream soda.

This particular store was called People's Drugstore, it was once a very popular drugstore chain in Washington, DC. They served all sorts of foods as you can see here, awith pie, cake, and ice cream. The counted was big enough to accommodate a few dozen patrons, this is only one section of it. The lunch crowd came in fast, and you would often have to wait directly behind someone trying to eat. The patron would then have to ignore the heavy breathing on the back of their head, and try not to look at their reflection while eating. Many had to grab and go unless they were lucky enough to grab a chair. A large department store was on the opposite corner, so there were always plenty of people here.

This is a wonderful scene, Mike. Faved and liked