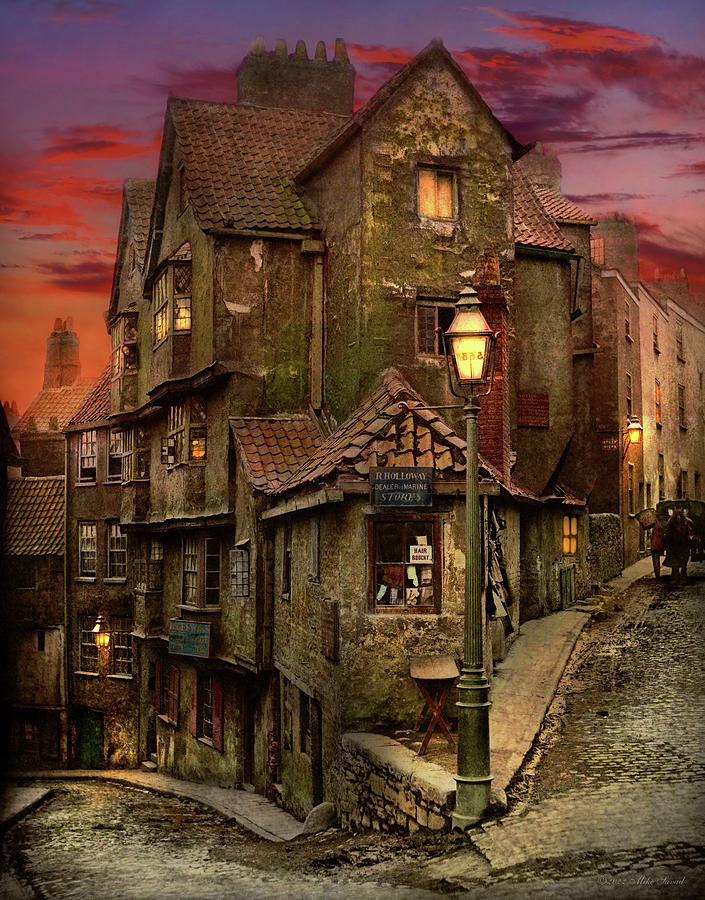 Located on a winding, steep road, in Bristol, England. This is Steep street and Trenchard. Photographed in 1866, but published as a set of 100 prints in 1891, where they destroyed the negative after. They wanted to show what old Bristol looked like.

This location existed in the medieval period, when it was the main road from the center of Bristol to Glouster. It was demolished in 1871, to make space for a flatter safer street, in which they demolished this charming though be it crumbling abode. And renamed Steep Street, with Level Street. Just kidding its called Colston St.

The building in front of us, "R Holloway Dealer in Marine Stores", they bought hair. In the old days, the locals would have called this a "rag and bone shop". Which today would mean second hand store. But in those days, second hand meant a real hand, as they would sell old rags and a pile of old bones. Besides playing pirate with them, bones were often used to make knife handles, ornaments, and when the grease was stripped, extracted and was useful to make soap.

Below is a blurb about these types of stores from Charles Dickens:

Congratulations, your work is Featured in "Photographic Camera Art" I invite you to place it in the group's "2020-2022 Featured Image Archive" Discussion!

Great work, Mike!!! CONGRATULATIONS, your work is featured in "Your Best Work"! I invite you to place it in the group's "Featured Image Archive" discussion thread and any other thread that is fitting!! 😊

Love this image. Stunning! Congrats on your feature. FAV and Tweeted.

This is STUNNING, Mike! Wow!