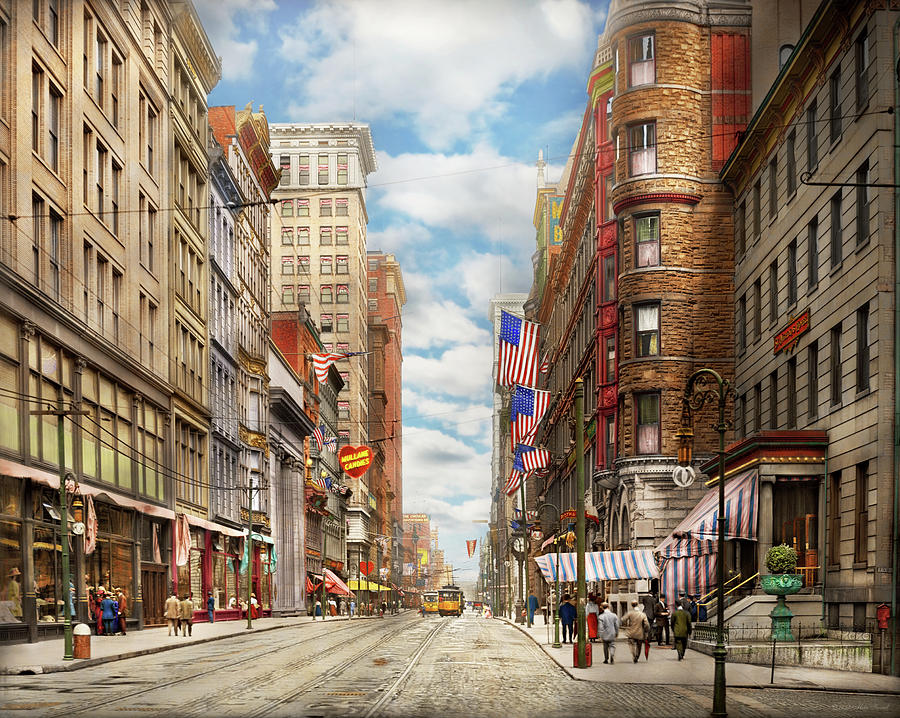 On the left is the H&S Pogue building. Founded in 1863, when the brothers Henry and Samuel Pogue took over their uncle's dry-good store. The building you see here was built in 1878, however the landmark store wasn't built until 1916, eventually they extended into Carew tower as well. The name later changed to L.S Ayres, shortly before the building was demolished in 1988 to make room for Tower Place Mall, they had a garage as well, but that was removed in 2016.

That building with the columns on the left was the Third national bank, which I believe eventually became the Fifth Third bank, called that because it merged with the Fifth bank.

Next to that, the one with the pink awnings was the Gidding-Jenny store. It was an exclusive women's clothier and had operated in that location for 88 years. It sold high-grade apparel, or "correct dress for women". Paquin gowns from Paris, mink coats, pink suits and Odalisque perfume.

Their first store was opened in 1904 in Duluth, MN. However this store opened on this spot on Oct. 8, 1907. The building itself is a work of art, noting of mahogany and marble cases, rich crimson carpets, and the entire front surface of the building is covered in Rookwood pottery, described to be as pretty as a Persian rug, and is still there today. Everything is suspended by copper wire.

On the right side is the St. Nicholas Hotel. Not a lot is known about it, other than it was demolished in 1914, replaced with a new one in 1916, and that's what is there today.

The one with all the flags is the McAlin Department store. The clock out front served as a meeting place for generations. However its currently located in the Heritage Village Museum in Sharon woods. McAlpin had his original store in 1852 as a wholesale firm. In 1880 he moved the store from Pearl Street into the former Shillito's store at 13 W. Fourth St. in 1892, they switched from being a wholesaler to a retailer. They stayed in that location for more than a 100 years. Currently this building was named after them, but they aren't in business under that name.

Another amazing post-manipulation. Can't get enough of your work, Mike. Such skill. Congrats on the feature and regards.