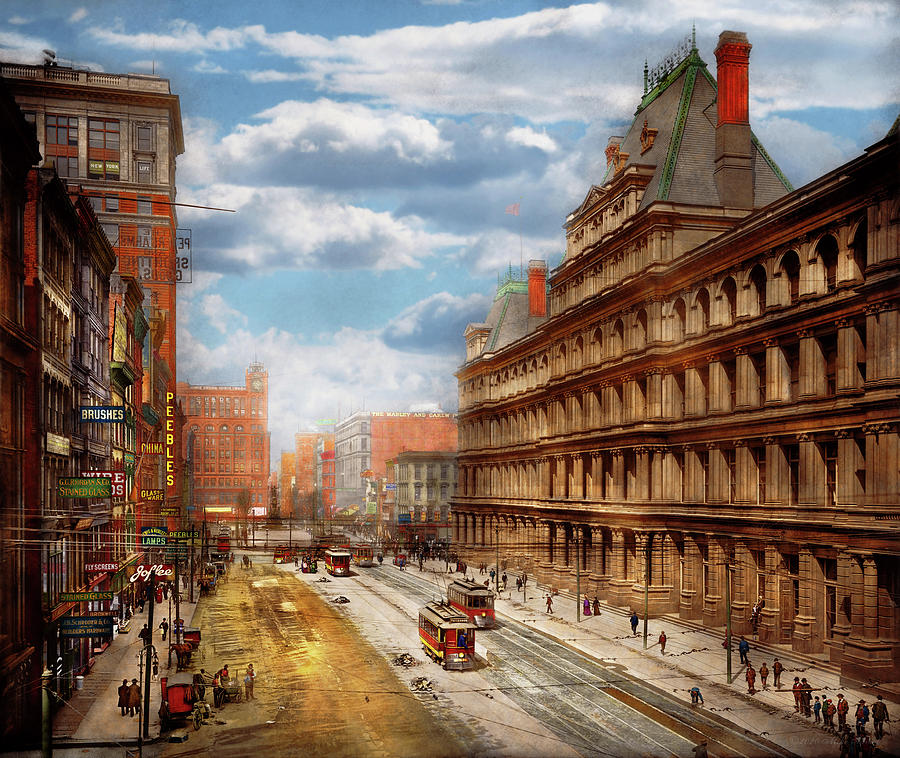 It seems many of the stores changed hands every few years, that or they got new signs.

On the left is the Peeble's Grocery store, it was there at least until 1960, opening before 1900. The Nonpareil hotel also had a long life. In the background on the left is the CH&D building (it has the clock tower). It was later replaced with the Carew tower building.

There is a fountain in the back, that is the Tyler Davidson Fountain, in its original location (they moved it since then). It was in 1871, originally it was considered the center of town.

There is a motorman in streetcar below, he's holding a long iron shaft, that's used to change to a new lane. These are electric cars, as they used the electricity, power was returned along the line back to the power station. But the phone company complained that due to electrolytic reaction, their own wires would corrode. The said the power would leak through the tracks and up into the phone pole. As a result the streetcar company had to string up new wires just to send the power back on its own dedicated line. That's why Cincinnati streetcars ended up being equipped with dual poles.

On the right rear is the Mabley and Carew Dept store.

Beautiful. I love it. l/f

Congratulations on your feature in the Fine Art America Group "Images That Excite You!" Sharing on Twitter!

Congratulations on being featured in the FAA Group ‘Promote Your Work Here and Get Noticed.' To ensure your feature remains available over time, post your featured image(s) in the Group's 'Thanks for the Feature / Image Archive.’ Your image has been pinned to the Group’s features board (www.pinterest.ca/tendrelimages/promote-your-work-here-get-noticed)