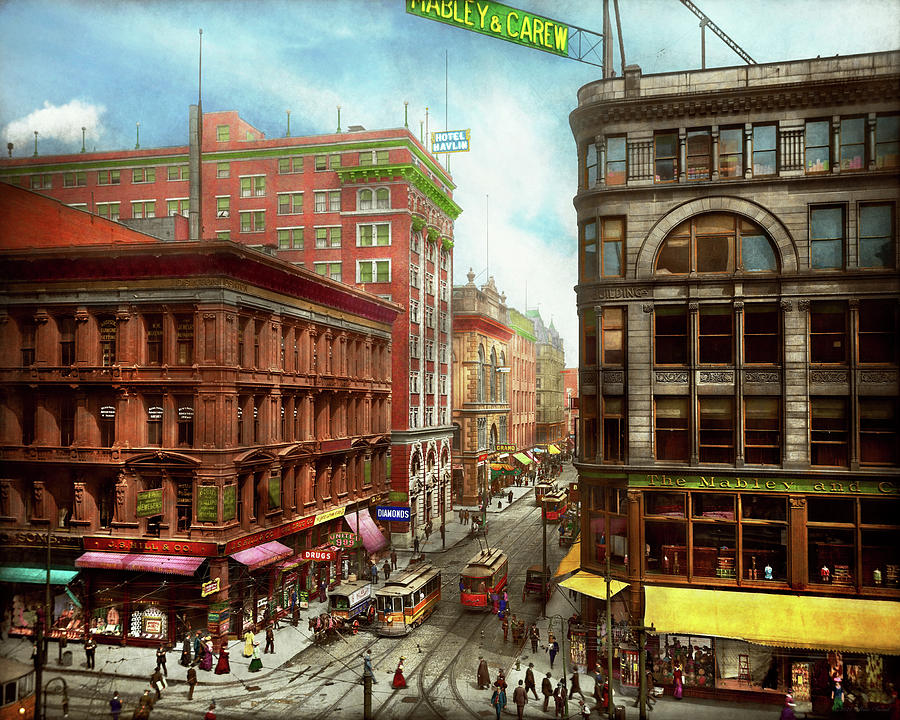 We are floating above the intersection of Vine St and Fifth St. If you compared it to today, there is only a single building that exists and that's down the block.

The building on the left was named after David Sinton, it was built in 1907, so its relatively new building, but it was demolished in 1967. In its day though, it housed a number of jewelry stores and boutiques. Apparently it does have a marker in history, as being a meeting place, which led to the Black Sox scandal of 1919.

On the right was the Mabley & Carew department store, founded in 1877 by C.R. Mabley and J.T. Carew. Built in 1889, it occupied three different corners of Fifth and Vine Streets, it helped transform the area into the heart of the city.

In 1891, Carew had vowed to clean up the Southwest corner and built the Carew building, which was later replaced by Carew tower. The store then moved into that tower in 1930, then moved again into the old Rollman's department store building on the Northwest corner in 1962. In 1978, Mabley & Carew was purchased by Elder-Beerman, then eventually closed down in 1985, the building was toned down in 1991.

Looking down the center street, on the left, is Hotel Havlin opened in 1906, which later became a part of Rollman's Department Store. It was a fireproof hotel, had a European plan (where they charge for the room, but it has no meals), it was central located and each room had an electric fan in it, at no extra charge. Rates were $2.00 and up.

And finally the last building on the end, the beige one, is the Cincinnatian hotel, opened in 1882, it is 8 stories tall, and when it opened was the tallest building in Cincinnati. It's still in use today, located on the Northwest corner of Sixth and Vine.

Congratulations on your sale.

Congratulations on your recent sale.

Congratulations, your wonderful image has been featured on the Homepage of the Candid Street Photography Group, please feel free to add it as a permanent record to the Discussion thread for featured images