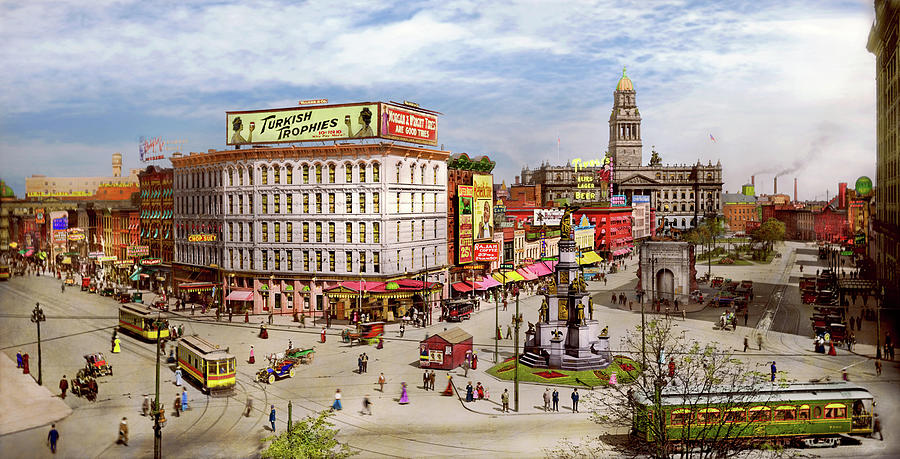 This location is in Detroit, Michigan, its called Campus Martius. Back in 1805, the city burned down (there seems to be a great fire in almost every town around this time). When they rebuilt it, they decided this will be the center of town. They named this location after the principal square in Marietta, Ohio, the first capital of the Northwestern territories. Martius is Latin for Field of Mars, where Roman hero's walked.

The large white building in the center was original the Kirkwood hotel, built in 1880. Later around 1909 or so, they turned it into a theatre, named The Family Theatre, they had moving pictures and vaudeville. It stayed open as a theater till about the 1960's to 1970's, where it eventually only showed X-rated movies, but kept the Family theatre title, which was confusing. They eventually changed it to Follies Theater, and then it burned down on July 26th 1973. Presently this location is a building shaped parking lot.

That statue in the front is the Soldier and Sailors Monument in its original position. It was moved a 125 ft, to building something else on that spot. Today it stands in its new location on top of a taller pedestal.

That monument with the arch was temporary. It was installed in 1910 to celebrate the convention of the Benevolent and Protective Order of Elks. The inscription on it read: The fault of our brothers we write upon the sand. Their virtues upon tablets of love and memory." There was another, larger arch at the other end of downtown.

The building in the background is the Wayne County courthouse. It replaced a much smaller courthouse, today its an historic landmark. As of this writing I believe they want to use it for residential use. Just behind that, the green building on the right, is Saint Andrew Hall. A church that still stands today, minus the siding and the roof.