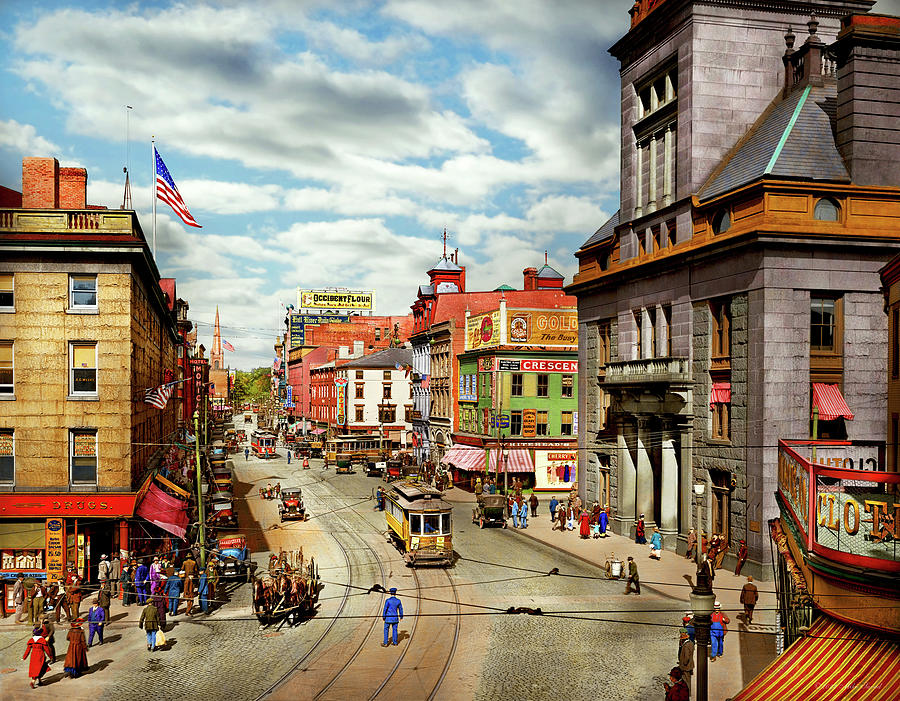 Every town has their own version of Main Street, and this is that. As you can see it was quite a busy area with all sorts of businesses.

On the right is City hall, a replacement for one that burned down. It remained here till about 1960, in which they tore it down to make room for a new highway, building a new one just near by. They kept the bell and those pillars, but relocated them.

Almost every large town I come across has had a large fire in town, destroying everything, and this one is no exception. There was a large fire in 1928, everything you see here, all the way up to the Bijou movie theater was destroyed, (the theater is near that church on the left). The Mohican Hotel, The Globe Newspaper, and the Wilbur were also destroyed. The theater still stands today, but its just a normal office building. The church lost its steeple at some point as many do.

While this street is really interesting to look at, this town is really known for a lady named Lizzie Borden. Back in the 1890's, she was accused of killing her father and her step mother with an ax. The stepmother was struck 18 times, the father 11.

However due to the lack of evidence, she was acquitted in 1892, which was a real relief to her. While she claimed she didn't do it, she did inherit the estate which was about $7 million in today's money.

While she was free, her reputation was ruined, as everyone assumed she did it. For the rest of her life kids would dare each other to ring her doorbell in the middle of the night. Or pelt her house with gravel and eggs. She happened to live just 2 blocks from where this scene took place.

Also, naturally, this became a jump roping rhyme, because kids always like gory tunes. Folklore says that the rhyme was made by an anonymous writer to sell newspapers:

Lizzie Borden took an ax
and gave her mother forty whacks.
When she saw what she had done,
she gave her father forty-one.

The rhyme has a less well-known second verse:

Andrew Borden now is dead,
Lizzie hit him on the head.
Up in heaven he will sing,
on the gallows she will swing.