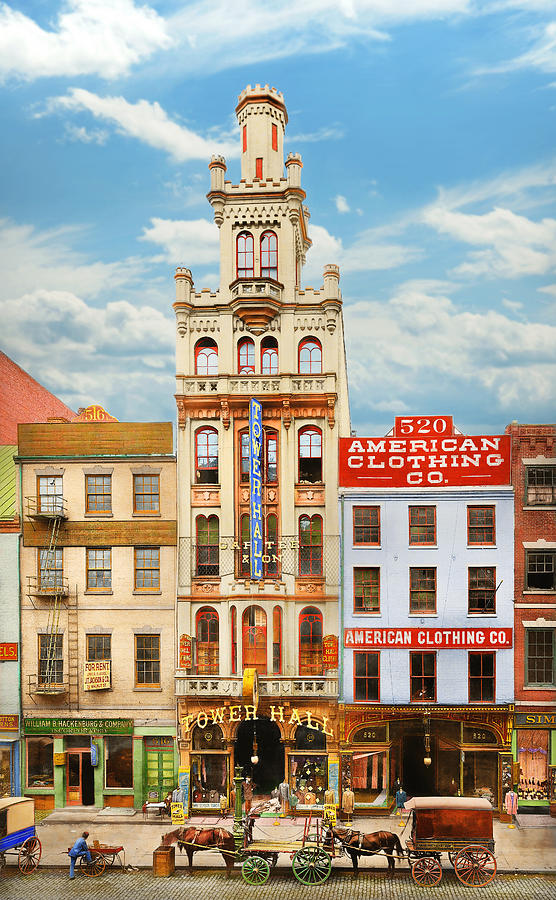 What an interesting building in the middle of a block. This is Bennett's tower, built in 1855, by a man named Col. Joseph M Bennett, who by the 1850's became a famous clothier and was the owner of one of the largest businesses in the city. He attributed his success to his advertising methods. He would print notices written in verse by a specially hired 'resident poet'.

But mostly he created this unique structure. Originally his building was about 4 story's tall, but there wasn't enough room for everything. Then he noticed the Jayne building, a tall structure, was just what he needed. Instead of building outward, he built upward. He created a 7 story building, shaped like a castle. The fashionable architecture of the day was Greek Revival, but he felt that was overdone, so it was designed in Norman architecture instead. It consisted of a metal skeleton, it was one of the first buildings to use this method of construction. It wasn't until 16 years from when they built this, that another one was made. He wanted a large open floor space and that's how he did it.

After it was built, it became an instant landmark, it was the second tallest building in the city, Jayne's was just a bit taller. Bennett opened the new Bennett's Tower Hall Clothing Bazaar, it was a complete store, they actually made the clothes there in the building, it had office space and the store. It made him rich. People saw this structure from down the block and went inside just to see it.

A teenager by the name of John Wanamaker, after leaving a bad job in another clothing store, came to work at this store, starting at the bottom. He worked his way up and learned all about advertising from his boss, which was considered the king of advertising. He ended up creating another store just up the block, the Wanamaker Department store. He had a chain of them actually.

This building was torn down in 1957, they removed everything from this section of block, to make room for Independence National Historic Park.

Mike, your wonderful image has been FEATURED on the home page of "The Meandering Photographer”