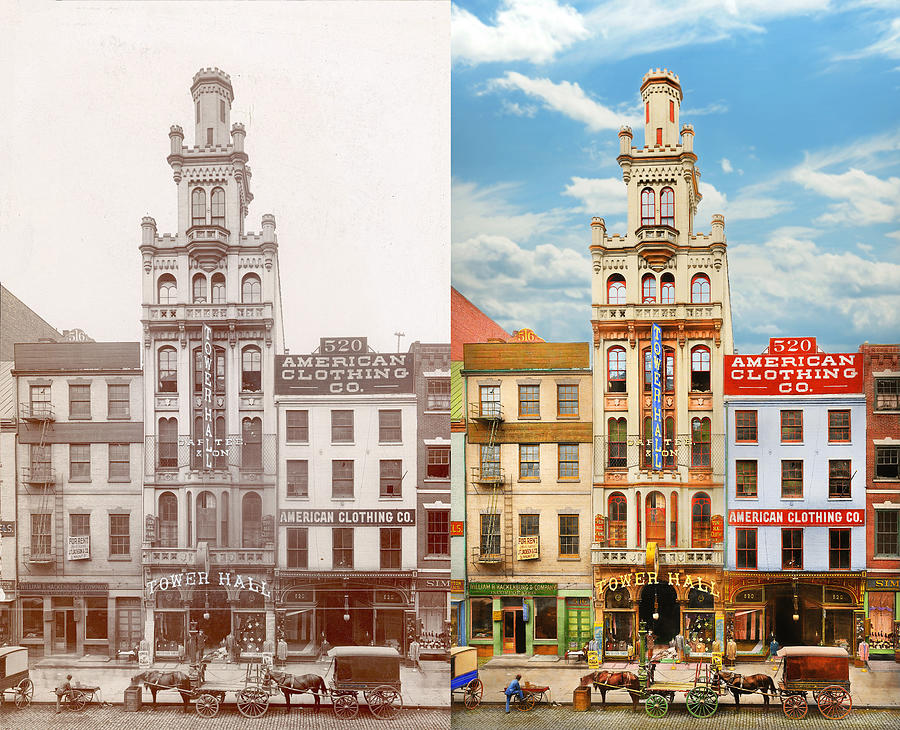 This structure was built in 1855, but Col. Joseph M Bennett, who in became wealthy selling clothes. He created this 7 story structure to sell clothing, set up offices and made clothes inside. People came because the building was shaped like a big castle, complete with a look out tower. He didn't have the space to build out, so he built it up.

Anyway, I couldn't find any info about what it actually looked like though, other than it looked like a pale building. There was an interesting arrangement of horses eating stuff from the wagon. I assume he owned those. Never seen a horse eat from a box before.

Originally there were more people, you can see faint ghosts on the left, in front of the peanut guy. Usually I try to fill them in with light color, but it was just blurry shoes, and it added nothing.

The signs were painted on which is interesting. I colorized another version of this from 1902, and everything looks totally different, paint, signs etc, are all different. A lot changed in a few years time.

Also, I have seen this on other images randomly. But there are tiny initials on two of the buildings. The Rent building has WH in between the windows, in such a place that I couldn't see a person going out of their way to do. And CM or CM on the level where the signs are on the main building. I wonder if that's early graffiti, or if that's the way the photography could watermark the image. There was no indication who shot this, other than it came from a book in the 1920's.