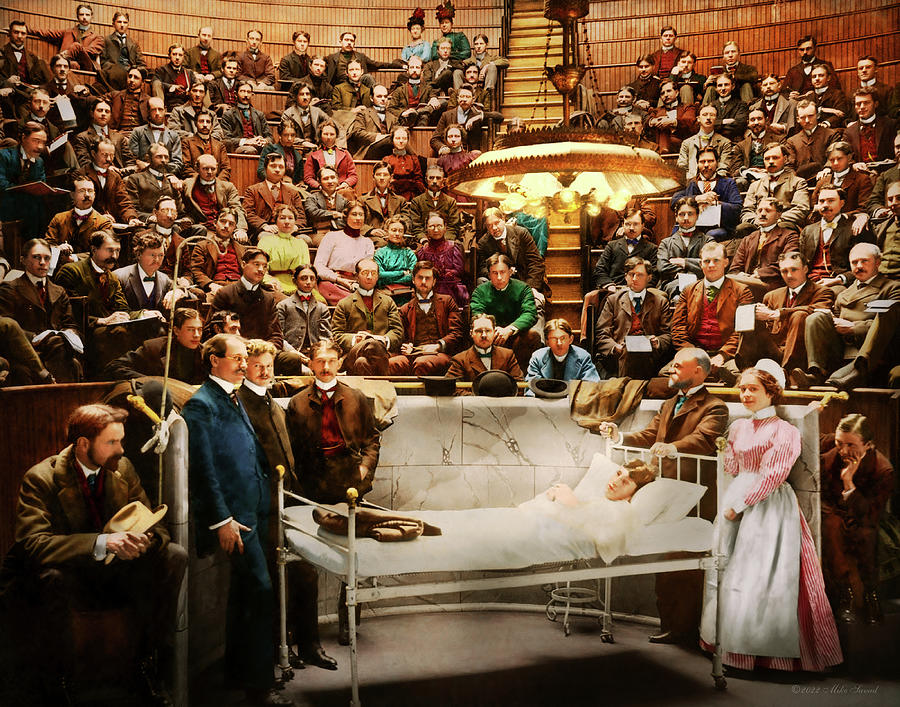 This is the Lecture Hall in Rush Medical College that was located in the Cook County Hospital amphitheater. Here they would perform operations, exams or dissect cadavers. In those days before germs were invented, they didn't wear scrubs. Instead they would wear whatever clothes they came in with. The apron was used to keep the blood off their clothes.

This room was also called an Operating Theater, it was comprised of tiered rows that either let people sit or they had to stand. It was well lit, using large windows on the ceiling, and they had a smaller light near the patient. You had to hope it wasn't raining that day or had in and out clouds.

Back in the nineteenth century, it wasn't required to have a medical degree if you wanted to practice medicine. Maybe that's why they called it a practice, because you are practicing on them? However if you did go to school, this was the type of training you received. You could then go on to open your own school, tuition paid for the staff, it gave the school prestige and helped attract paying patients.

Rush Medical College, was Chicago's first medical school, it was founded by Daniel Brainard in 1843. Like most medical schools of the time, it offered two 16 week terms. Instruction each week consisted of four daily lectures. The second term was a repeat of the first. Rush College attracted many skilled lecturers, including Nathan S Davis, a founder of the American Medical Association. Which dedicated to enhance the state of the medical profession by reforming the medical education.

It's hard to imagine what was going through that boy's head when he opened his eyes and he saw all those people staring back. The doctor is the one next to the nurse on the right, he's the teacher today.