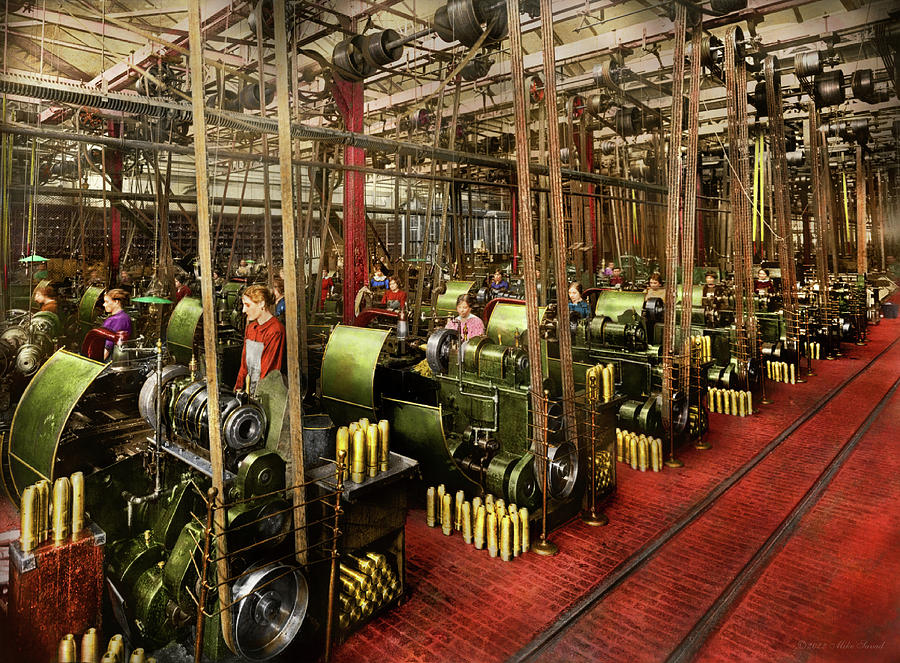 This was the Delahaye automobile factory during World War One in Paris, France. In its day, this company produced some sweet looking cars, really fancy looking, almost futuristic. But when the war came, companies converted, and this company tried to make tanks.

Really ugly tanks. Awkward designs, with triangular wheels, it could twist and turn over things, but the designs were just kind of silly looking. I couldn't really tell if it ever left the prototype stage or not, but as far as I can tell they mostly made ammunition for other tanks.

The factory was employed mostly by women, as the men were fighting, this was the same in the US, and in WW2, and when the guys came back, they usually remove the ladies.

Look at all the belts this factory has, wow. Who had to maintain that? Was it a team or just one guy? Belts attached to wheels that powered other wheels, that powered machines, row after row. I've never scene so many in one shop before. Also I never have seen those perforated belts, I wonder if those were leather too? Or was it a hybrid material?

Congratulations! Your work is featured in our group All Genres of Photography. Here is a link to our latest Self Posting Gallery : https://fineartamerica.com/groups/all-genre-of-photography-.html?showmessage=true&messageid=7821522