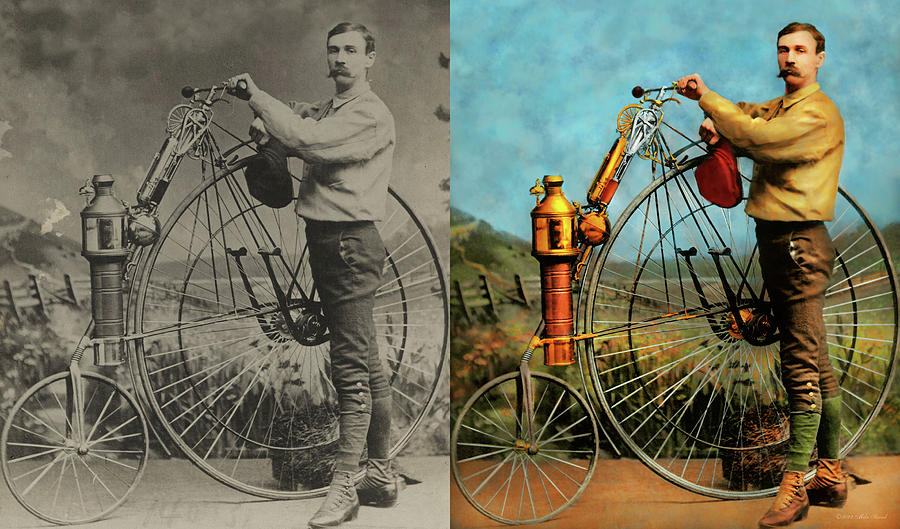 Steampunk - The Steampowered Bicycle 1884 - Side by Side

Steampunk - The Steampowered Bicycle 1884 - Side by Side

I've always liked seeing strange Victorian inventions, everything decked out in brass. Weird ideas that never came to be, everything had a motor on it back then.

This was a steam powered bike, basically it was a kerosene driven, penny farthing that could get a 1/4 hp and could push out about 12-15 mph depending who you ask. He invented one of the first motorcycles. It had about an hours worth of fuel and water. It was created by Lucius Day Copeland, an engineer in Arizona. He patented it in 1881.

A replica was made, using careful measurements from a surviving model and they made a working version, that could drive. For some reason they chrome plated things, and I just don't think they would have done that in this, that metal looks brass to me, I also think its a prototype. I did find a drawing confirming the colors I wanted. But I couldn't find any info if he created many of these. Most of the focus was on a tricycle version, of which he had a factory in Camden, NJ, Northrup Manufacturing which they made around 200.

When this picture was shot is a mystery. Some say 1884, others say 1894. But I've seen one of these on the road at either time, so its hard to tell.

Can you imagine this thing on cobblestone? Awkward.