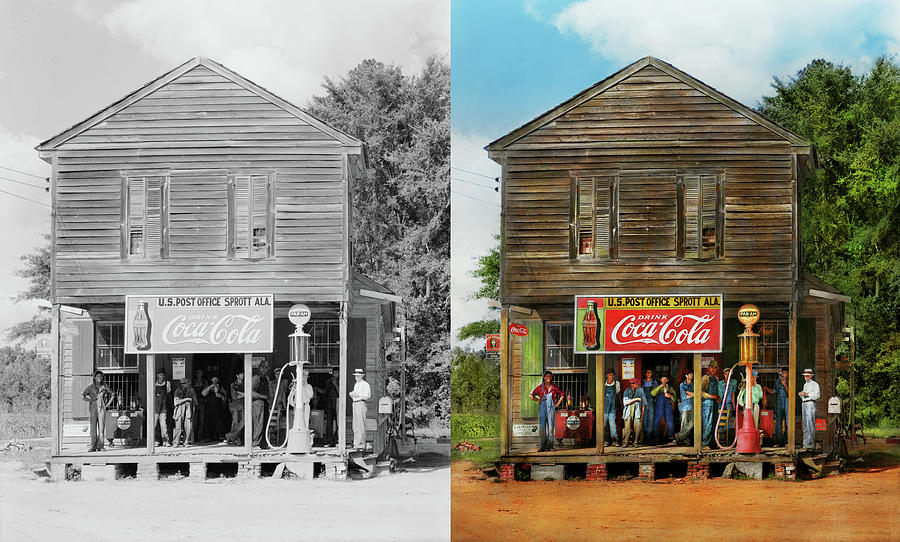 A photography by the name of Walker Evans and James Agee, published a powerful documentary on Alabama sharecroppers during the depression. This image was one of those photos.

The people in this, I assume is the entire town, its a small town from what I gather, are probably poor. Their clothes are ripped, you can see toes on some of them, their shoes became sandals from wear and tear. Or maybe its just a fashion statement, hard to tell.

It's amazing the building is still standing, if you look at the supports, they are just barely holding it up. Its a bit disconcerting that there are shims on the side of the gas pump. Or that the base of the pump is on a broken concrete base surrounded by rot. People smoking behind it, it really is amazing its still there.

It was built in 1881, and closed in 1993, the building is still there today, its just white and shorter, lacks a porch, the pump and any real quality that made it interesting looking. You can find it by looking up the town in google, and it will be right under that pin.

I almost missed the guy in the back above the mail box, and one other weird detail. If you look on the scaffolding on the right, above that mailbox and that guys face - there is a human head. It looks like a human head, hard to tell due to shadow loss, but I saw an ear, nose, and hairline. Only thing is, there is no body, the angle is sharp, he could be sleeping in a weird spot. Or its an illusion of shadow and light, and it just looks like a head, maybe its a manikin? I don't think we will ever know really. I hope its not a head.