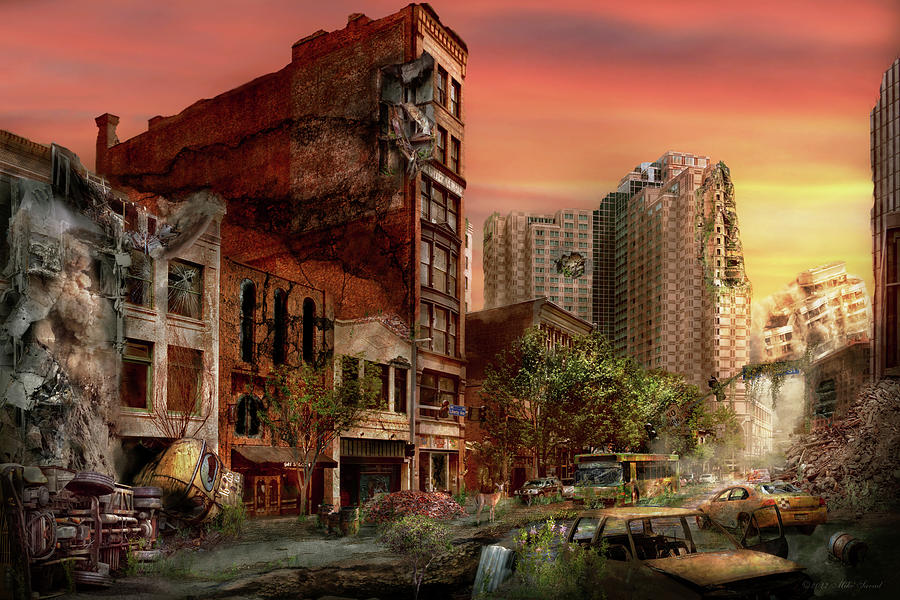 Back in the late 1990's, everyone was in a panic because of something called the Y2K bug. For some reason, programmers, when programming computers never thought that the year 2000 would come up in the future. The date would simply be 1900 when it reset.

The fear was, that if 1999 rolled over to 2000, all the electronics around the world would stop, or worse, revolt. Nukes would be launched automatically for some reason, and everything would go crazy. People laughed at that idea and totally ignored the bug.

And everything was fine, until one day, the nukes did go off on its own, no one knows why, I guess it really did matter, maybe they should have fixed it. But that's too late now, nukes would keep going off inside of each person's countries. Only the countries that took this bug seriously survived. The others became a wasteland in no time at all.

Buildings are collapsing every day, food is scarce. Can't drive on the streets because they are broken and covered in broken cars. There were survivors, but what's the point of living at this point? You never know when another missile will drop either, so its all very frightening time to live.

Great Work! Congratulations! Your beautiful painterly photo has been chosen as a Painterly feature. You are invited to archive your work in the feature archive discussion. Feel free to comment on other painterly art that is being featured on the Painterly home page.

Congrats!! Your amazing artwork has been featured in IF THE IMAGE EXCITES YOU group. You are invited to post your artwork in “Thank you and Promote” and any other discussion in which the artwork fits. Thanks for sharing.