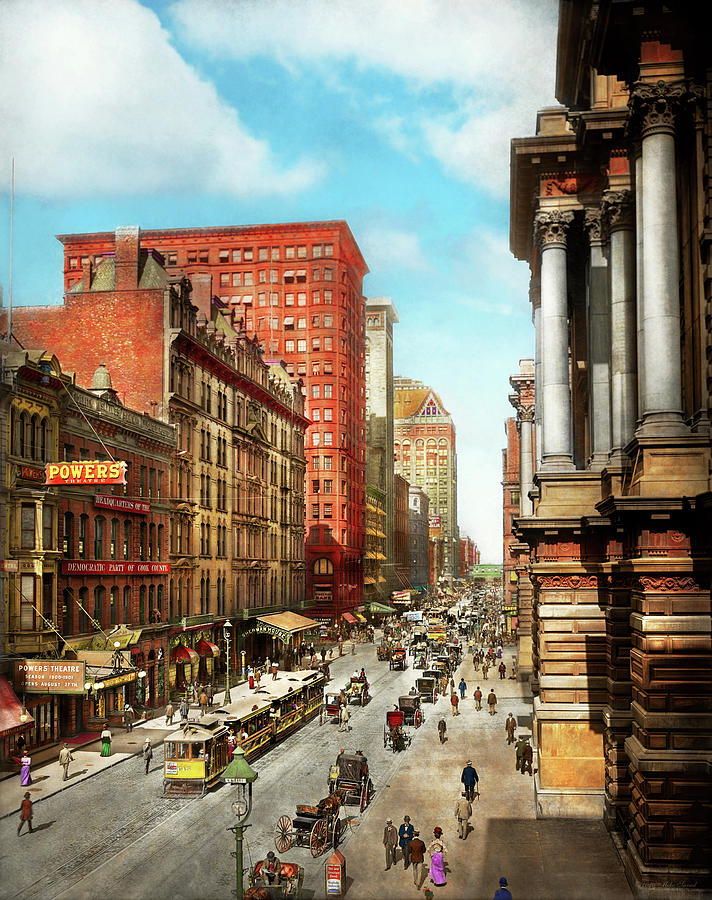 This is what Randolph street looked like in the year 1900.

On the right is the original City Hall & County building, it was built, like many of these buildings in around 1870 or so. Though the replaced this building roughly 5 years from now.

Across the street near the Powers Theatre is the Democratic Headquarters. Oddly there is a small dog statue on the building. I don't know if its related to the democrats or the pub below the statue. It's cute though. Next door to that is a rather elaborate stained glass awning. Most of these buildings are long gone, possibly replaced a few times. The only one that remains is the Delaware building. It's that 8 story grayish building on the left.

The cable cart you see there, it uses a cable under ground. The first car is called the grip car. It can pull three passenger cars. But there is no return on this street, they must have used a horse streetcar of some kind. When the streetcar wanted to go they would grip an always moving cable. And to stop they would let go, and presumably hit the brakes.

Well done on your wonderful sale.

Congratulations, your work is Featured in "Photographic Camera Art" I invite you to place it in the group's "2020 Featured Image Archive" Discussion!! L/Tweet!

Congratulations ! Your Creative Art was featured in our group CREATIVE DIGITAL ART COMMUNITY.

Congratulations on being featured in the FAA Group ‘Promote Your Work Here and Get Noticed.' To ensure your feature remains available over time, post your featured image(s) in the Group's 'Thanks for the Feature / Image Archive.’ l/f/p